Napping behavior is not fully explained by science, but learning to strategically nap is key to maintaining a polyphasic pattern, to not waste away all the napping skills that sleepers have acquired. In order to take advantage of these sleeping strategies, it is recommended that these napping methods in this page be carried out only after the adaptation process is completed. If done during adaptation, this will set back the adaptation progress when sleep times are different from the designed schedule. However, in return napping outside of the schedule may prevent a bigger oversleep later on from skipping the previous sleep(s); this comes down to personal choice, but skipping sleep is still generally a better option to avoid affecting the sleep onset of the next sleep in a negative way.

These napping practices have been experimented in the past and relevant data have been included in multiple research articles. If done properly, this will create new possibilities to better maintain an adapted polyphasic schedule in real life scenarios rather than reverting back to monophasic sleep. However, the associated risks include a messy circadian rhythm, insomnia at night, a decrease in productivity, an increase in fatigue and ultimately a ruined adaptation state as sleep quality deteriorates from extreme changes in sleep times. Because of this, you should utilize these practices only sparingly.

DISCLAIMER: The following information on napping might or might not work out for you, depending on how you do it and other factors (e.g, being too anxious to fall asleep). If you have to resort to these methods, please make sure to understand what you are about to do, what can happen and do it at your schedule’s risk.

Important note! This napping method should only be attempted after the adaptation phase is completed. Doing so during adaptation will mess up scheduling and result in a chaotic sleep schedule. New, inexperienced polyphasic sleepers who have a first successful adaptation should be consistent with sleep times and start to slowly flex their sleep blocks by minor margins to have a feel of a flexible sleep schedule.

This napping behavior is defined as stocking up sleep in advance of an extended period of time that requires the sleepers to be awake1. The strategy is to get some sleep (doesn’t necessarily have to be a nap, a core sleep of 90m multiples is applicable as well) before this wakeful period to enhance performance, retain productivity during the wake period until the next sleep can be done. Skipping sleeps and staying awake through the whole extended period that requires wakefulness not only can lower mental focus, clarity of the mind and affect individual performance on the task but also can drastically increase the chance to oversleep in the next sleep, breaking down the stability of the sleep pattern. Because of this, adding short naps is prefered over adding cores, since they are going to destabilize schedules to a lower degree.

It is important to note that prophylactic sleeping does not warrant sleep reduction compared to the current sleep hours on adapted schedules. Stocking up sleep (e.g, sleeping for 10h for a day and 2h the next day) can end up wrecking the whole schedule and reset the adaptation process entirely. On an adapted schedule, sleepers only get sleep pressure to rise certain periods of time before their upcoming sleep (~30-40 minutes before a nap or core sleep), so sleep times can only be moved around to a certain extent to adjust the remaining sleep portions of the schedule. Most importantly, not being able to actually fall asleep in the designed prophylactic sleep will basically not boost personal alertness during the long wake period. For this reason, it is necessary to properly time the prophylactic sleep to get the desired actual sleep. The most ideal condition for prophylactic sleeping to work is with pre-existing sleep deprivation conditions, or sleep pressure at the end of a BRAC to facilitate falling asleep.

An adapted SEVAMAYL sleeper with the following sleep schedule displayed below: 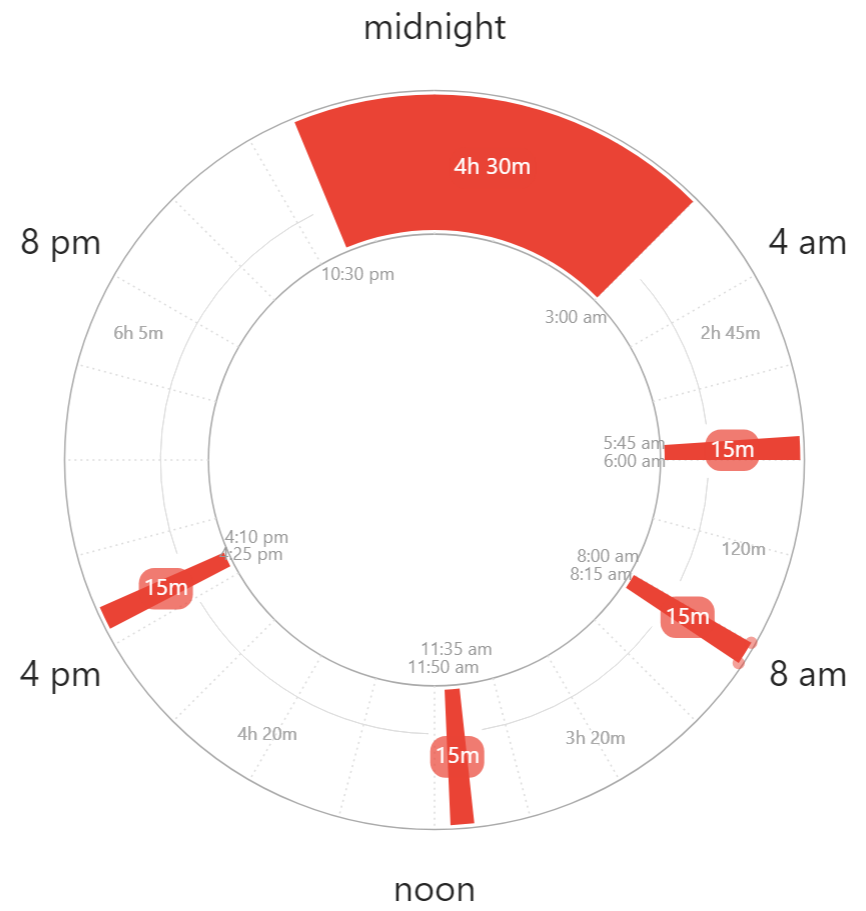 This is a standard SEVAMAYL variant on normal days. On a hectic day that forces the sleeper to stay awake from 9:30 AM to 6 PM, the schedule can become: One 30 minute nap (a Protracted Nap) is added to the schedule, and the core sleep is slightly adjusted (30 minutes in advance) to accommodate the extra naps. This napping method has been succeeded by adapted SEVAMAYL sleeper Gosugenji in the community (~6 months adapted and counting). Getting REM sleep in the naps is not an imperative requirement to sustain alertness into the day. Being able to fall asleep in the naps to get NREM2 is enough to gain certain wakefulness in preparation for the long wake period ahead. The 30 minute nap was placed around the REM peak to strategically facilitate falling asleep and increase the chance of getting some amount of REM sleep, which sustains wakefulness much better than a pure NREM2 nap. Due to the flexible nature of SEVAMAYL and that there is no limit on the number of daily naps a sleeper can have, adding naps or modifying nap lengths does not alter the basic premises of the schedule. 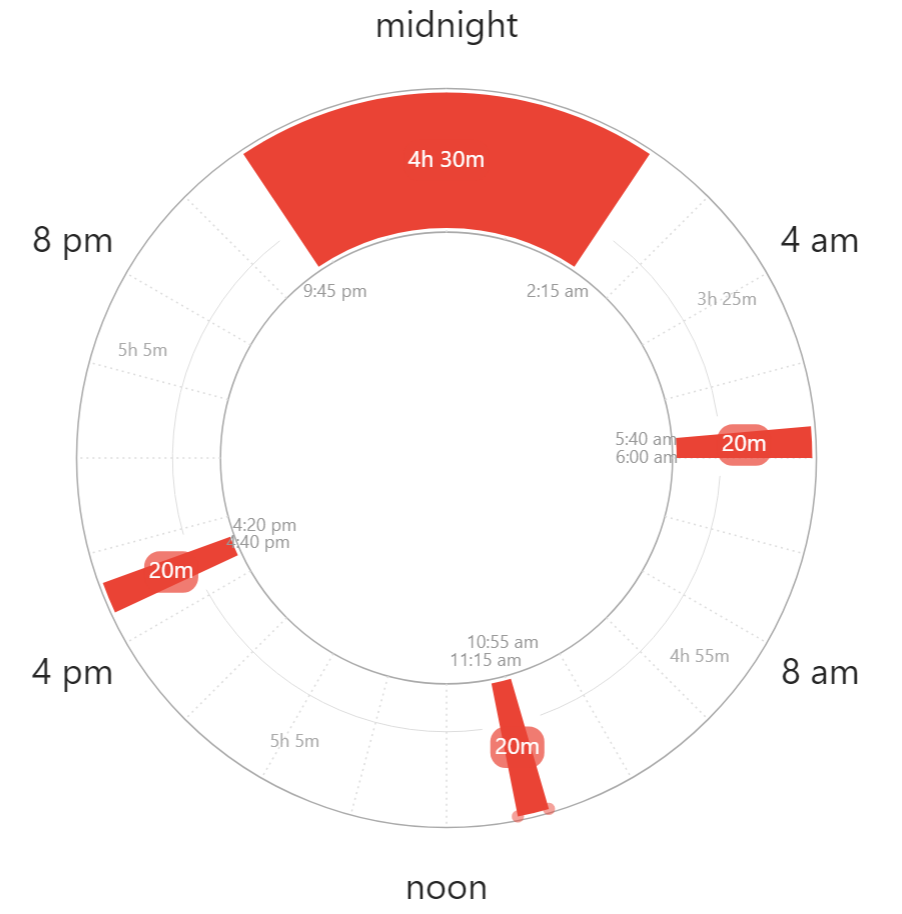 This is a variant of E3-extended (5.5h) that works (based on Allyzor, an adapted member of the community). On regular days, sleep is distributed throughout the day, with a fixed core sleep of 4.5h and 3 20 minute naps. However, in the event that the noon nap has to be removed and the sleeper has to stay awake from 9 AM to 4:30 PM, the schedule can become the following: The schedule takes the structure of DC1-extended, with 2 cores and 1 20 minute nap. This prophylactic method was done by community member Allyzor, who has been adapted to E3-extended for 2 years. However, she only turns a nap into a 90 minute sleep on very rare occasions, before returning to the base E3-extended as quickly as possible. The premise is the same as before – stocking up the 90 minute sleep before the long wake period and nap afterwards. By delaying the first nap, sleep deprivation is induced as the body is usually used to sleeping at an earlier time. A long-term adapted sleeper therefore can manipulate their sleeps to fit into their daily schedule to some extent without ruining the schedule’s rhythm. This Biphasic variant is based on GeneralNguyen’s schedule that does not aim to reduce total time spent in bed. On regular days, the schedule has a long core sleep at night and a nap of varying lengths in the day (noon-afternoon range). On busy days that allow no naps from after 11 AM to the time of the night sleep (~13h with no sleep), the schedule can take the following form: 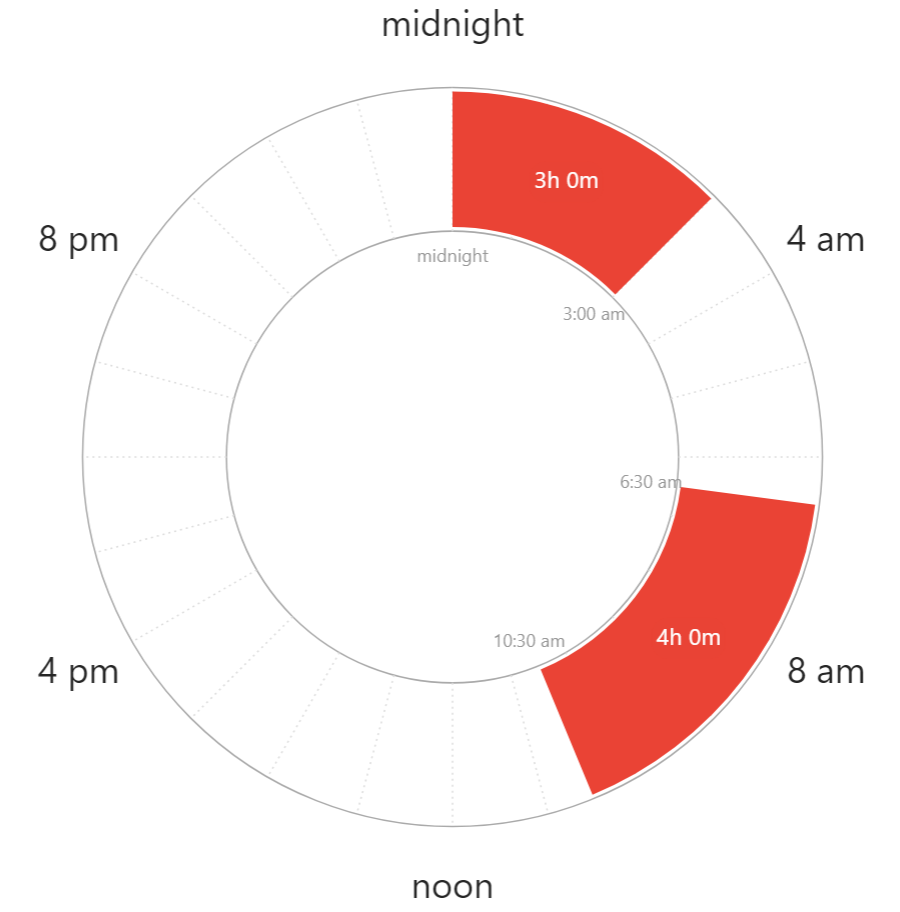 The main core sleep is segmented into two smaller cores, with the second core being placed very close to the long wake period, in the form of Segmented sleep. By sleeping only 3h for the first core, sleep deprivation is induced and sleeping again around dawn becomes easy thanks to REM pressure increase around that time. The main purpose is to wake up at a later time than usual to gain more alertness before the long period that does not allow any sleep. Despite taking on the form of Segmented sleep, this does not violate the structure of the whole sleep schedule, as it allows all forms of Biphasic sleeping (although consistent E1/Siesta form is preferred).

Besides an adapted state, it is safe to stay adapted for some more days before resorting to this method. There are a lot of ways to pull off a prophylactic method as demonstrated by 3 examples in the above section, but the method would benefit flexible schedules the most. Rigid schedules require another period of being adapted to flexing (aside from the adapted state to the fixed base) for the body to get used to slightly varying sleep times from day to day, making it easier to fall asleep at certain hours in prophylactic mode. Theoretically speaking, all schedules (except fixed nap-only schedules like Uberman, 6 naps and Dymaxion, 4 naps) do offer some potential for prophylactic tendency after adapted, however, how much potential is unknown currently. A prophylactic sleep can have various duration depending on personal sleep schedule, not purely a fixed length. Feeling drowsy and sleepy is a solid indicator to prepare for a prophylactic sleep. Regardless, it should only be done rarely to avoid hurting a sleep schedule’s structure, even though it is a viable approach to maintain a schedule after the adaptation phase.

Important Note! Similar to prophylactic napping, replacement napping should be used sparingly even after a solid adapted state on a polyphasic schedule. The reason why it is used less often than prophylactic napping is because of its mechanics as presented below.

Replacement napping refers to naps taken as a response to subjective fatigue, mainly based in the reduction of night sleep duration1. The reduction in night sleep duration is caused by a lot of factors (e.g, interrupted sleep, inability to go back to sleep after waking up after some hours (WASO), premature wakes (early wake-up time before the desired sleep duration) to name a few). Thus, replacement naps often have longer duration than a regular power nap (at least 60 minutes). By definition, the build-up of sleep deprivation is aimed to be resolved after a replacement nap is taken during daytime. The most common type of sleep pattern to make use of replacement naps is Biphasic sleeping. If the nap is timed properly, it has been shown to not affect night sleep quality1.

Similar to prophylactic sleeping, replacement naps seek to improve productivity and mental focus with a longer nap duration that contains vital sleep stages to sustain alertness for the following hours. Regarding the efficacy of replacement naps, it was concluded that frequent nappers feel less tired and more alert after taking the nap2. However, the experiment was only limited to non-reducing biphasic type with the replacement naps of 60 minutes long (which is NOT a recommended nap duration) in short periods of time and sleep inertia was reported to linger upon awakening.

In the context of polyphasic sleeping, replacement naps are not appropriate to maintain a proper adaptation to rigid schedules. Lengthening naps to a full cycle during sleep-deprived adaptation state counts as an oversleep, and will reverse adaptation. After the adaptation progress is done, having an occasional replacement nap in case nocturnal sleep has to be shortened is tolerable. Abusing this napping strategy too often however is still not recommended, as sleep repartitioning is undone and adaptation can be reset. Similar to prophylactic sleeping, it is also highly questionable that replacement naps can be occasionally taken on nap-only schedules, because adding a core to these nap-exclusive schedules will reverse adaptation entirely.