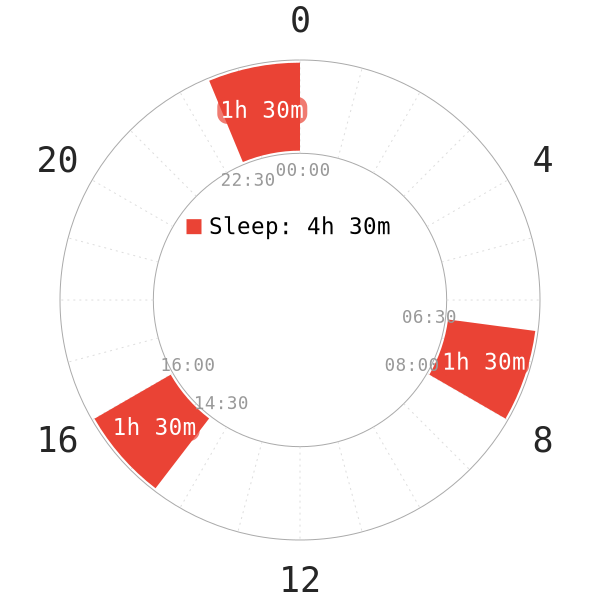 The original Triphasic schedule consists of 3 single-cycle equidistant sleep blocks; one sleep cycle every 8 hours. So in each 8-hour block, you stay awake for 6.5 hours and sleep for 1.5h. One could view this schedule as combination of segmented sleep with late siesta core. It is one of the 5 polyphasic schedules with only core sleeps.

A possible adaptation route to Triphasic can be as follows:

Because of the high repartitioning of sleep stages on a mere 4.5h total sleep, Triphasic offers a lot of sleep reduction along with a high level of sleep compression. The cold turkey method, however, has accounted for most successful adaptations to Triphasic.Â

One can first adapt to Segmented or Siesta sleep, and then transition to Triphasic. Segmented sleep fosters the split sleep mechanic, while Siesta has a 90m daytime core. However, the cold turkey method has reported more success over the years.Â

Aside from the non-equidistant Triphasic scheduling which has proven to be viable by a couple sleepers, the most popular and widely successful version is the extended version. A single cycle duration can range from 80m-120m in humans. However, there is only successes with the default 90m cycle; it may be possible to schedule Triphasic with all core sleeps being ~100m or 120m to match personal cycle length.Â

The extended version has multiple perks:

With an overall easier adaptation than regular Triphasic, the night time hours between 2 nocturnal cores open up for various activities without having to sacrifice all productivity when adapting.Â

Alternatively, it may be possible to extend the REM core to 3h instead of the SWS core in the evening. This may be beneficial for social hours in the evening or less sleep in the early evening hours. However, it has no known official successes to date; a sleeper with low SWS needs and high REM needs may still benefit from this Triphasic-extended variant.

Non-reducing Triphasic rarely sees much attempt; nevertheless, there have been some attempts recently, mostly from the underage population. It is unclear what the advantages would be with such a bulky and cumbersome sleep distribution, compared to Triphasic-extended. Success rate is also very rare, only a case or two.

The adaptation is potentially even easier than Triphasic-extended; however, this variant is only suitable for short-term goals or those who cannot sleep in one long chunk at night. The niches are very small; despite a lot of sleep, it may not be totally friendly to underage individuals, who are better with a non-reducing biphasic pattern instead.

Wanna read some literature sources on Triphasic? Check them out here.

Triphasic and Tri Core schedules overall are very unpopular because of the following reasons:

In addition, Triphasic-extended has a whole lot more utility. It is one of the most well-rounded schedules and has reported a lot of success. With a versatile 6h sleep each day, sleepers gain quite a bit more extra time for their favorite activities. On another note, individuals with low sleep requirements can also learn to flex the cores on Triphasic to transition to CAMAYL.Â

Triphasic is overall a very unique polyphasic schedule in its own right. It can create a sense of very long days with a long wake gap between each core. Vivid dreaming is also common from the morning and daytime cores. The short sleep blocks also resemble a nap-only schedule with only 3 sleeps per day. The exposure to a polyphasic system of only core sleeps will promise an eerie adaptation experience.Â