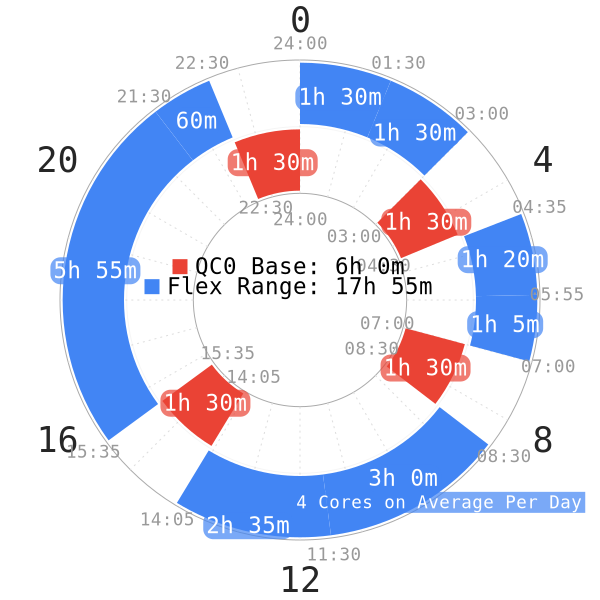 CAMAYL is an abbreviation of â€śCore As Much As You Likeâ€ť, as part of the â€ś-AMAYLâ€ť polyphasic series, a highly flexible prototype. Similar to SEVAMAYL, it is unlikely that one could adapt to this schedule using the cold turkey method; all attempts have failed so far. A strict adaptation to a base schedule of only 90m core sleeps first(e.g, QC0) has proved to make a successful CAMAYL adaptation later on. Sleepers need a strong sense of their personal drowsiness to place their cores at ideal times for SWS and REM. The ability to adapt to flexible core sleeps paves the way for a more hectic lifestyle.

The main purposes of this schedule are to:

Because of the core sleeps long duration, it is more difficult to fit them into daytime hours than schedules with short daytime naps. The schedule would work best for self-employed, work-at-home occupations; those who want to try out something other than Biphasic, Everyman and Uberman may also attempt CAMAYL.Â

Consistently long, extended wake periods would hinder the adaptation to the overall flexibility; a slightly flexible QC0 or Triphasic with small changes in sleep times and no varying number of cores from day to day would make for better choices.

After an adaptation to a schedule with exclusively 90m core sleeps, the brain has adjusted to the new reduced sleep total. It is then possible to slowly shift the core sleeps which contain highly repartitioned SWS and REM without reducing sleep quality. Flexing when adapting to strict sleep times will not achieve this goal. However, flexible cores may also contain less SWS/REM than a strictly timed core. A varying number of core sleeps from day to day would suffice.Â

Each core sleep supposedly only gives a slightly different amount of vital sleep percentage from day to day as from the adaptation to a strict base schedule. The cores also serve to maintain the required amount of SWS and REM each day to boost well-being and alertness around the clock.

Like SEVAMAYL, once adapted it is possible to occasionally extend a core sleep by 90m. It is then wiser to return to the normal 90m core duration for at least a week before extending it again. Similar to adapted schedules, the cores should give alertness boost around the clock with the correct timing.

The freedom to take a core whenever tired is satisfying. It is also comfortable to delay a core sleep for a couple hours in the afternoon, or skip a whole core together if necessary sometimes.

What variations of CAMAYL actually work?

The core duration of CAMAYL has a single cycle to simulate a personal sleep cycle, which ranges from 80m to 120m. Thus, it is possible to schedule a CAMAYL variant with only 80m cores or any duration up to 120m cores. There may be natural wakes as a result of frequent sleep and some level of sleep compression; however, this should not occur until after many weeks on the schedule.

As previously mentioned, there have been no successful cold turkey attempts to CAMAYL. It seems to be because the sleep pressure from each core sleep is not great enough to force a complete repartitioning of SWS and REM (barring SPAMAYL).

The adaptation pathway is as follows:

Other tips on flexing sleep:

The adaptation to CAMAYL is not going to be similar to the adaptation to the strict bases (Triphasic and QC0). It will require constant monitoring of energy dips and alertness-drowsiness patterns to place the cores.

Most importantly, only sleepers with monophasic baseline on the lower side (5-6h) are suitable for flexing the Triphasic base.

Longer single cycle length (e.g, 100-120m) suggests that 3-4 core sleeps per day may be sustainable for these sleepers. However, unlike power naps on other â€ś-AMAYLâ€ť schedules, CAMAYL cores require precise timing. The end goals are to decrease sleep onset, sleep through the whole core duration and optimize waking hours. Since each core already lasts for 90m, taking a couple of them racks up total sleep time quickly.

Delaying a core will increase the desire for sleep; when adapted, there will be no problems to overall well-being until one delays a core excessively (2-3h for a morning core and 4-5h for a daytime core). It is also common to expect shorter wake periods during graveyard hours and longer ones during the day to place cores accordingly.

Because of the multiple core sleeps, CAMAYL has the following perks:

In emergency situations where some daytime events prevent taking a daytime core, it is possible to utilize short naps (10-15m). A couple points to note about this process:

Other notes on downsides

With all the downsides, the schedule can still greatly benefit mutant sleepers; those who exercise a lot or have a much higher amount of SWS than REM sleep will enjoy it. These sleepers will need fewer cores each day while achieving a high level of flexibility in scheduling. Most importantly, core sleeps support the glymphatic system (clearing brain toxins) much better than nap-only schedules.