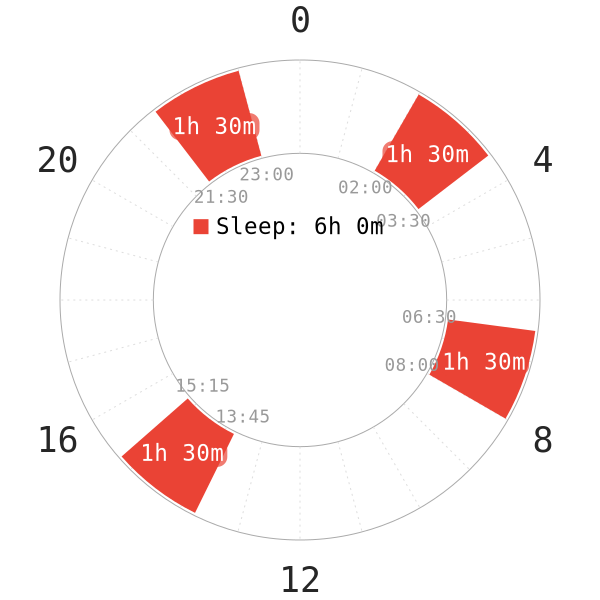 The Quad Core (QC) family of schedules, the newest schedule group, are very unusual in structure; thus, they are very unpopular due to the intrusive sleep blocks, scheduling limitations and wake time activities. They are a series of schedules that contain 4 core sleeps, totaling at least 6h sleep. So far, the only tried-and-successful schedule in this category is Quad Core 0 (QC0). Mostly because of the heavy focus on core sleeps, QC schedule(s) have a very low number of naps, or no naps at all.

Similar to Tri Core sleep, an advantage of QC schedule(s) is that they divide the day into several awake blocks with 4 core sleeps spreading across the day. Because different core sleeps yield different percentages of sleep types, this supports alertness and wakefulness and keeps homeostatic pressure low. Unlike schedules with a 6h uninterrupted core sleep, QC promotes deeper sleep compression with its single-cycle core sleeps.

The first QC schedule, Quad Core 0, has no naps and only 4 core sleeps. It was briefly mentioned in theÂ Ubersleep book by Puredoxyk under the nameÂ  â€śAlternate Segmentedâ€ť variant. However, there was no adaptation success ever reported until 2020. The book did not specify optimal scheduling either. There have been some attempts up to date, but with limited success.

Currently, QC0 is one of the 5 polyphasic schedules with only core sleepsÂ (the other 4 being Segmented, Siesta, CAMAYL and Triphasic).

It is also possible to schedule Quad Core 0 equidistantly, which resembles a Dymaxion structure with core sleeps. This may facilitate falling asleep as the wake gap between each core is increased to 4h30m rather than being much closer together at night. However, even this distribution so far has reported no success.

Since Quad Core 0 already has a decent amount of sleep, transitioning from Segmented sleep likely will not help. Thus, a cold turkey adaptation is likely superior.Â

Research on adaptation mechanics of a similar polyphasic schedule

Although the research focus was not on Quad Core 0, there are inherent similarities between the studied polyphasic schedule and QC0. This polyphasic schedule has 8 sleep blocks of 60m each and spread equidistantly. Researchers coined it an experimental “3-hour Day” polyphasic schedule1; participants slept for 1h and stayed awake for 2h, totaling 8h TST. Participants also slept on a monophasic pattern consistently (8h TST) before transitioning to this non-reducing polyphasic pattern. The cycle rinsed and repeated for 9Â days before a recovery on monophasic sleep. Below is the napchart of the exact sleep times of the schedule.Â

All in all, the high total sleep, somewhat similar distribution of sleep blocks and sleep duration on this polyphasic schedule may apply to QC0’s adaptation. A 60m sleep block also somewhat resembles a “mini-core” sleep compared to the 90m equivalent.Â

Based on the research of the 3-hour day schedule, we derive a possible adaptation route to Quad Core 0 below. This route will roughly map out the process of repartitioning of vital sleep stages.Â

Despite looking to be a somewhat â€śeasierâ€ť Triphasic variant with an extra core sleep, most inexperienced polyphasic attempters reportedÂ difficulty falling asleep in some sleep blocks, especially the cores during graveyard hours when adaptation first begins. It is then increasingly difficult to handle SWS/REM wakes at the end of each core sleep as sleep onset issue remains. This is most likely because of the scheduleâ€™s total sleep and distribution of sleep blocks, which does not initially raise homeostatic pressure high enough to facilitate sleep.

Finally, poor quality core sleeps result in an oversleep when they finally manage to fall asleep in a core as sleep pressure becomes high enough.

Interested in a research paper on Quad Core sleep schedule? Check it out here.Â

Eventually, though, Quad Core 0 is still considered a subpar choice to Triphasic-extended, which is more beginner-friendly and sees plentiful success; it also faces stiff competition from other more popular multi-core schedules (Dual Core and Tri Core) in general.

The strongest reason one would adapt to this schedule first would be to transition to CAMAYL to gain a lot of flexibility in scheduling core sleeps. The flexible cores can then assist in a more hectic, changing lifestyle.