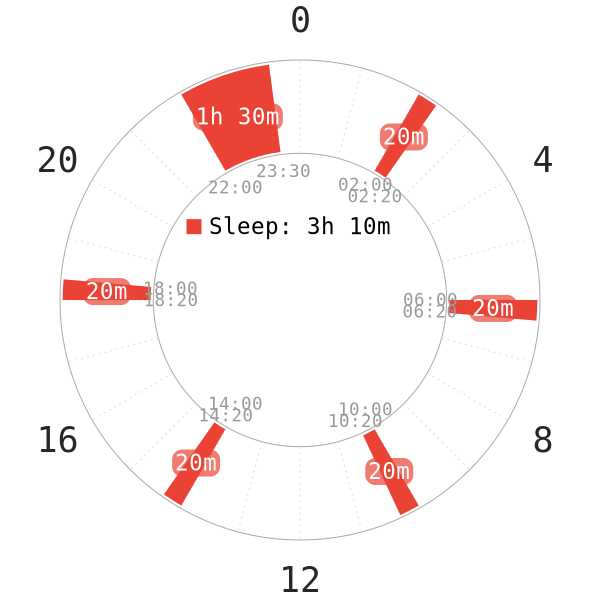 Everyman 5, or E5, is theĀ last schedule in the Everyman series. It has the most number of naps per day (5) out of all Everyman schedules. Because of a total sleep of only more than 3 hours, it is the last transition step before Uberman sleep (2h total sleep) in the rhythmic preservation path to Uberman. This schedule’s total sleep is below the minimum threshold for long-term sustenance; thus, average sleepers should not attempt this schedule.Ā

Despite Puredoxyk’s proposal, she did not mention any details about how to optimally schedule E5. Until recently, the Polyphasic Discord Community proposed it as a way to transition to Uberman.Ā

There has been no successful adaptation to E5 up to date. There have been few attempts with a hope to decrease E4’s difficulty with an extra nap; nevertheless, all attempts ended in swift failure. Like other polyphasic schedules, there are adaptation methods that can be useful to adapt to E5 if desired. Regardless of the methods, the overcoming the intensified repartitioning process is mandatory for any polyphasic sleepers to eventually succeed.Ā

Because there is a nap in the middle of the night, it makes the adaptation to this schedule itself, or even just a temporary transition a very challenging aspect. As core body temperature drops around nighttime hours which facilitates sleep, core sleeps are preferable to short naps.

An immediate transition from monophasic sleep will first cause naps to contain light sleep or trace SWS like usual. As REM pressure rises, it will then compete with SWS during repartitioning. Individuals with normal sleep requirements will only incur more sleep debts on this schedule; the total sleep will fail to meet the demand for sufficient SWS and REM daily.Ā

It is possible to transition to E5 from E3 (3-3.5h core) or any other Everyman schedules. However, there is no known successful adaptation either.Ā

For the most part, E5 adaptation isĀ similar to E4, if not more intense. The core sleep cannot support a regular amount of SWS requirements, so any naps in the day can generate SWS wakes. Once REM pressure builds up, adapters will have to manage the intense sleep inertia from each REM wake. Long crashes can occur frequently during adaptation due to SWS wakes.

All in all, it may be better to stay on E5 for a short amount of time, before making an immediate transition to Uberman (fast adaptation). This would limit as much built-up sleep deprivation as possible. However, no successful Uberman sleepers are known to have transitioned from E5 either.

Since there has been no successful adaptations to E5, there are possible variants that may or may not work. This is merely based on how successful Everyman variants look like over the width of history. There can also be other unexplored options regarding napping mechanics, but they require more adaptation samples. Extended versions may be possible, but at this point E3-extended or E4-extended would be better.Ā

This E5 variant attempts to shift more naps into the night; this in return leaves only 2 daytime naps. If adaptation is possible, it will create longer wake periods in the day, with a nap during lunch and after work. However, the cluster of nocturnal naps may be utterly difficult to adapt to; the high possibility of SWS wakes at night will creep into many naps.Ā

It is also unknown how long would be an optimal wake duration between each nap. Due to the low total sleep, the naps on E5 likely will not yield as much wakefulness than on other less extreme Everyman schedules. As a result, stocking up napping at night may not do enough to help offset the tiredness periods during the daytime wake gaps.Ā

With an excessive amount of naps spread in the day, Everyman 5 suffers from various downsides:

It also seems unlikely if Everyman 5 will ever gather enough attempts due to its highly constrained scheduling. There are some niches that it can offer, however.

Being a middle ground between the insane Uberman and a more sustainable E3 (or even E4-extended), E5 has the worst of all worlds. It is almost as inflexible as Uberman and the likes of E4, while also potentially unsustainable long-term for reasons above. Beginners and average polyphasic sleepers should not try to adapt to this schedule aside from some niche situations above.