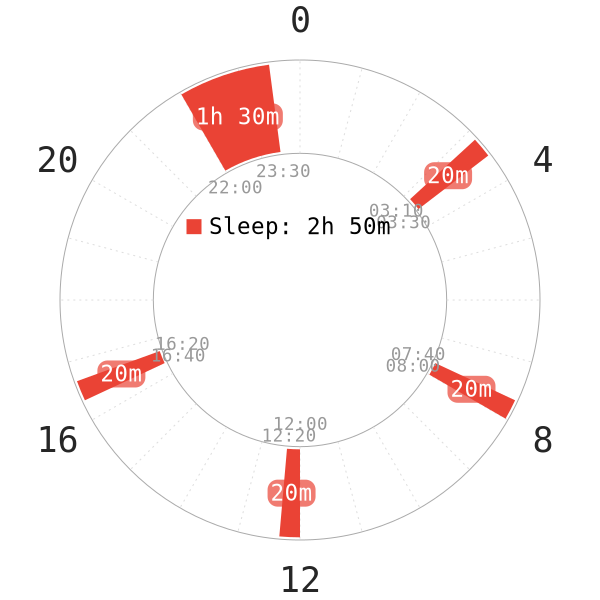 Everyman 4, or E4, is theÂ thirdÂ Everyman schedule in the Everyman polyphasic series. The structure of the schedule is very short and scattered. The longest sleep block is only 90m, so E4 now has the shortest core length on all Everyman schedules. It is one of the final steps (the other being E5) before the transition to Uberman. It consists of 4Â naps each day, and each nap lasts for 20m.Â

As part of the “Formula” by Puredoxyk, Everyman 4 used to be called “E1.5” to represent the core duration. With the shortest core duration of all Everyman schedules, E4 is now the most difficult (bar E5). In the same vein as E5, there should be 4-5 naps on an Everyman schedule with a 1.5h core. Despite the formula, Puredoxyk never attempted to adapt to E4. There are 5 sleep blocks each day on this Everyman schedule.Â

Everyman 4 keeps the same premises as other Everyman schedules, but under much harsher conditions. The core further reduces to the minimum cycle length from E3 with the addition of the fourth nap.Â

This is the most common method for success. So far, it has accounted for 100% of successful adaptations. With the gruesome adaptation process, this method can immediately tell if an adaptation is possible. If the adaptation can be complete, then this route may also take the shortest amount of time.Â

Though it is possible to transition to E4 as aÂ gradual adaptation from E3 or E2, so far this has reported no success. It is likely that adaptation to E3 is already overbearing at that point. On top of that is another immediate transition to E4 which is below the minimum sleep threshold.

E4 is also an option to fall back on if Uberman fails, but no one has been able to pull this off, either. The overall time it takes to adapt to E4 on this method would be very time-consuming.Â

Adaptation to Everyman 4 is severely more difficult than to E3, because the removal of 1 core cycle makes it impossible to preserve all SWS baseline. Mostly because of E4’s incredible difficulty, successful adaptations are very rare up to date. However, the extended version is milder, and may be more hospitable for adaptability.Â

When adaptation first begins, as usual sleepers may not fall asleep in some or all of the naps. However, as sleep debt quickly accumulates, it will be easy to do so; Stage 3 is bound to arrive in a matter of days. Sleep deprivation will continually build up rather than getting relieved by the humble amount of total sleep. An extreme adaptation is then essential to reach the equilibrium of SWS and REM in all sleep blocks.

Any oversleeps greater than a rare 10m or so will be devastating to the adaptation process. It requires both strict circadian entrainment and severe homeostatic pressure. Average, normal individuals will incur chronic sleep deprivation if they attempt to adapt to E4. Because of the near impossibility for an average polyphasic sleeper to adapt to this schedule, it is the case that inexperienced or non-mutant sleepers should not attempt this schedule.

Despite its unpopularity compared to E3 and Uberman, there has beenÂ limited success with E4 over the years. Below are the variants that have reported some success.

Up to date there has only been a success or two for this case. The concepts look similar to the default version, except for the nap placement.

Regardless, due to the low total sleep, it is necessary to schedule the naps somewhat close together; a 20m nap on E4 will not fuel performance for as long as a 20m nap on E3 or E2 for that reason. Thus, it is not advisable to have more than ~5h wake gap between any naps (barring the last wake gap in the afternoon to the core) on regular E4 scheduling.

One polyphasic sleeper from the Discord community has successfully adapted to this variant. This Everyman 4 is basically E3 (3.5h core variant) with an extra nap.

The extension of the core sleep and the high frequency of nighttime naps helps boost alertness more effectively during the worrisome graveyard hours. These hours is a common issue on almost, if not all, Everyman adaptations. Despite an overwhelming adaptation, E4-extended may be somewhat milder than E3. This is largely owing to the frequency of sleep and the combined efforts of the core and the naps to protect the vital sleep stages.

With a reasonable amount of sleep from the extension, E4-extended may be sustainable long-term if the lifestyle allows for the clunky scheduling.

With 5 sleep blocks per day, Everyman 4 offers an amazing amount of sleep reduction. However, sleeping 5 times per day may be a dull and demotivating concept. This is one of the reasons E4, whether extended or not, is far from as popular and well-known as E3.

Aside from the inflexibility after adaptation, virtually no exercise and/or consuming alcoholic beverages or drinks for an average sleeper, E4 actually has some saving graces from the more awkward E5. This may make it worth an attempt.

The extended variant shows that Everyman 4 remains a viable long-term option. Those who vacillate between Uberman’s extreme adaptation and E3 (whose sleep reduction does not suffice) can consider E4. The higher frequency of naps (at least on extended version) can also help prevent certain crashes. Experienced sleepers can rely on their napping skills to learn to fall asleep and achieve SOREM in the nap(s) in the early adaptation stage.

This advantage teaches napping skills quickly, as sleep pressure racks up fast on E4. This is also an advantage that can push adaptation to a later stage faster than on schedules like E1; there are multiple opportunities per day to learn to fall asleep and wake up in just 20 minutes.

After this short learning period, one can recover on monophasic sleep and proceed to attempt other less extreme polyphasic schedules. They can still apply their learned napping skills from E4. In a way, Everyman 4 is a less extreme version of naptation.Â

During periods that require less sleep for a brief period of time (e.g, ~1 week to ~1 month), the short naps and the core can act as temporary tanks to give some rest. Getting some rest in the meantime is more beneficial than pulling all-nighters. Individuals who can take advantage of E4 are the following:

E4’s scheduling structure gives it the same vantage points as schedules with 2 daytime naps (e.g, DC2, E3). At face values, scheduling 2 daytime naps can be a problematic lifestyle; yet, it is possible if done right.

Thus, E4 can fit into even mainstream 9-to-5 jobs, as long as napping is permissible among all relevant parties at work.

Utility of the extended version

However, even though E4-extended seems to be a hospitable variant, more data is necessary to determine its other niches or downsides. For the default E4 version, reportedly successful adapters did not stay on it for more than a couple months (~2-3 months). They are mostly perpetually insomniac or even chronically sleep deprived individuals. Certain living conditions force them to sleep less:

The community would need more adaptation samples to determine if E4 is overall a viable long-term schedule for individuals who reportedly can complete the adaptation phase.