We ever wondered how famous people sleep to achieve all the astounding success in their lifetime. Here, we know that polyphasic sleeping has had a long journey throughout the length of history. Common sleep patterns are segmented and biphasic sleeping.

However, this section enumerates famous polyphasic sleepers. Not everyone is in the list; only certain sleepers that have qualified with at least 2 consistent sources. In addition, sufficiently consistent information among different sources and extra verification from said sleepers’ family members, colleagues, etc. is in the collection if possible.

Note that the displayed sleep schedules are purely illustrations, not exact by the minutes.

There has been a lot of anecdotal evidence that Da Vinci followed a Uberman-like schedule, where he allegedly slept 15 minutes every 4 hours staying awake. Up to date, however, there is no confirmation from any credible source that directly claims that Da Vinci followed that sleep schedule. The myth that Da Vinci was able to strictly follow the Uberman-like schedule seems almost very compelling. This is because of his extreme dedication to working and creating many inventions. All of these would require a lot of time to furnish.

While it is a debatable subject, Claudio Stampi, the polyphasic sleep researcher who originally postulated the claim that Da Vinci followed the Uberman schedule, has conducted experiments with the ultra-short sleep schedules that resemble Uberman. There were very few volunteers; however, one did report to be alert and not suffer from cognitive deficits.

The experiment duration was only within a couple weeks, with the longest being 48 days6. Therefore, it is insufficient to draw any conclusions whether long-term Uberman would be a sustainable and healthy sleep pattern.

Throughout his book “Why We Nap”,  Stampi suggests that an ultra-short schedule like Uberman is possible at least for a short period of time. Yet, he never directly concluded that Da Vinci actually followed this sleep pattern for his entire life6. In fact, Stampi’s source for the claim that Da Vinci followed the Uberman schedule, Giancarlo Sbragia, had this to say about how they came across the information themselves:

Claudio Stampi asked me how I found out about the sleep-reduction method developed by Leonardo da Vinci. […] I cannot recall exactly where or from whom I gathered information about Leonardo’s sleep habits. At that time I had a friend who was a medium and capable of extrasensory perception. She helped me with this experiment.

It was probably from her that I learned about the peculiar Leonardo sleep-wake pattern, even though today, 30 years later, I am not completely sure.

Ronaldo, a world-wide famous football star, allegedly divides the main monophasic core sleep into 5 different 90m cores each day. Surprisingly, he has persisted for years and still remains in top shape2. Given the flexible timetables, Ronaldo is very likely to be able to move his sleeps around to accommodate for his sleep regime and stays adapted for years. There can be with slip-ups, such as sleeping for more than 1 cycle in a row and able to maintain its proposed structure when time allows.

However, there has been no information regarding his “adaptation phase”.

Roger Federer, a legendary tennis star, claimed in an interview that he sleeps around 12h each day. This consists of 10h at night and a 2h siesta3. It is very reasonable that he needs a lot of sleep for extra muscle recovery from wear and tear on a professional sport level.

And to optimize performance, it is understandable how and why athletes need higher sleep total than a normal human. Heavy physical exercises increase SWS need. However, it is also possible that Federer’s sleep need was already higher than that of an average human before he became a pro tennis player.

Churchill had a stable habit of napping late in the day and stayed up late into the night to work. He remarked that his nap felt like he was having an extra day1.

Kobe Bryant reportedly had 2 different sleep sessions each day. It is very possible that his sleep need was much lower than that of an average human to thrive on only 4 hours of sleep.

Considering that he was a professional basketball player with an intense training regime, Bryant possibly possessed a genetic mutation. This gift allowed him to sleep a lot less than average and still keep up with his training without any long-term exhaustion4. 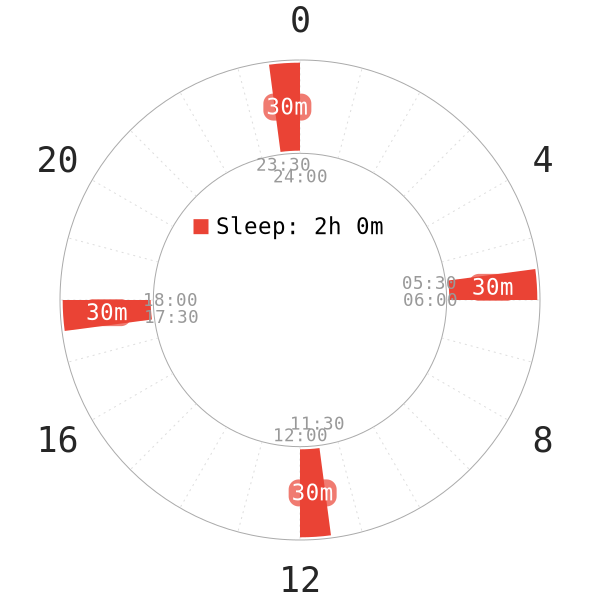 As a creator of Dymaxion sleep, Buckminster Fuller, an American architect and inventor in the 20th century, was able to stay on the schedule for about 2 years5. He noted increased alertness, energy and focus from a lot more extra waking hours.

However, it is very likely that he is a very short sleeper with a genetic mutation to pull off such a difficult nap-only schedule.

One thought on “Famous Polyphasic Sleepers”