False awakening (FA) dreams are defined as a double dream, where sleepers dream about sleeping and waking up from the dream, while in reality they are still sleeping – this is a false belief that eventually leads to the realization that the prior wake was part of a dream1,2,3. During the period of the first dream, sleepers are aware that they are dreaming owing to changes in the conscious state – they wake up and find out from the dream that they are still dreaming, all within the original dream itself4. This type of dreaming behavior is rather close to lucid dreaming.

Polyphasic sleeping experiences from multiple community members include several incidents with this Inception-style dreaming. Whether the dream-inducing mechanism of polyphasic sleeping gives rise to more bizarre dreaming outcomes is yet to be confirmed. The human body can wake up on its own after a dreamy REM nap (before the alarm goes off) in many cases (including both those who are adapting and adapted to said polyphasic schedules), even though the nap only lasts for 20 minutes by default on many schedules.

An exemplary incident in the polyphasic community

“Damn, crazy dream I had just now. The events themselves are not that important though.

I basically had a layered dream like in Inception. Like, I dreamt and woke up from the dream and dreamt that I laid in bed having woken up from the dream. Happened at least two times, with the end of the nap being the most illustrative example, I believe. I dreamt that I was feeling threatened by someone and about to engage in combat and started growling more bestially than I could right now in RL. Then I woke up, laying in bed, still growling. Then I woke up from that. Also of note is that while falling asleep, at one moment I felt the upper part of the headband I use to cover my eyes flapping like hit by a really strong gust of wind, except my room isn’t insulated that terribly. A bit later I experienced a somewhat similar sensation, closest to perceiving a sound inside my head, also moving rapidly from one side to the other, like a strong gust of wind.”

– Hackerman, a polyphasic sleeper who was adapting to E3-extended (5.5h total). Reported on February 25, 2020 from the Discord. 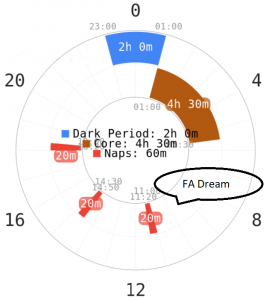 The incident was reported by Hackerman upon his awakening from the 20 minute nap starting at 11:00 AM on his schedule, which is a beneficial time for REM sleep. This dreaming incident matches the description of an FA dream – Hackerman thought that he woke up from his nap, but that was still a dream, and he did not actually wake up in reality. He also expressed astonishment upon awakening, prompting him to log it almost immediately. The message was sent ~13 minutes upon awakening, with a decently long text and detailed descriptions of the events. Considering that it took some time to log the encounter with the false awakening dream and finally send the message, it implies that such lucid-like experience did not seem to cause much brain fog or sleep inertia upon awakening; it rather caused him to snap out of the dream by the time the alarm went off and become alert almost on the spot. With the details fresh on the mind, Hackerman reported that the experience was at least positive (despite its eeriness) with an entirely new dreaming exposure. Most remarkably, Hackerman was on Day 20 when he had this encounter (with very minor oversleeping up to this point), suggesting that he was on the borderline of Stage 3 adaptation, where repartitioning occurs and REM naps become common. It is only reasonable that he was able to effectively nap by the time – waking up from a REM nap and recalling vivid details of the dreams.

How to produce false awakening dreams

It was suggested in one study that to create FA dream instances, it is necessary for the sleepers to be disturbed in their sleep – for example, walking into the room of the sleeper, making some noises, touching them or prodding them to create a “suggestive” environment of FA5. Another note is that this whole simulation process should be repeated at least intermittently and periodically (once every 30 minutes or 2 hours). This process resulted in 4 different possibilities:

Among these 4 possibilities, option 4 has the highest chance to create an FA instance5. This procedure is a compelling approach because it takes advantage of REM sleep, the sleep stage where the most vivid dreaming occurs.

However, this is a human-assisted method to generate FA dreams. No known methods of dreaming to date are reliable enough to help polyphasic sleepers create FA encounters on their own. Theoretically, mastering lucid dreaming with practice can achieve the goal, but how much, and to what extent, is unknown. Back to the previous case, Hackerman was a new polyphasic sleeper and had never been a lucid dreamer his whole life. The incident occurred randomly in one nap. One reason for the occurrence was because of sleep deprivation and intense REM pressure, which helps build up vivid dreaming and an FA dream happened to come into existence. Besides Hackerman, a couple other FA dream incidents were also reported from other polyphasic sleepers (mostly on very extreme schedules, e.g, nap-only type or rigorous sleep reduction compared to monophasic baseline). However, very few cases of FA dreams were reported after the adaptation phase, and all these FA dreams appear to be harmless. However, the exact data is unsampled, so it is impossible to draw any correlations regarding FA dream frequency between during and after the adaptation phase.

Can false awakening dreams get ugly?

Although normal FA dreams are mild, some can be very disturbing when sleepers become conscious. Because of conflicting reports of different positive and negative FA dreams, FA dreams are classified into 2 different types, with type 1 being very casual and common, and type 2 being more unpleasant than type 13.

Type 1: The sleeper dreams that they wake up from their sleep, and continue their habitual routines to start the day (using monophasic sleep as an example). No imagery from this layered dream appears to be disgusting or nightmare-fueled materials. The sleeper then finally rises from their slumber without feeling tense or fearful.

Type 2: Similar start as type 1, except that the atmosphere is tense, horrifying and potentially suffocating (e.g, waking up in a demonic dimension) with the appearance of ghostly beings or monsters, which is similar to sleep paralysis experiences.

It was also noted that both types result in a change in consciousness, as the dreamer becomes aware that they are dreaming. Furthermore, these experiences closely resemble Out-of-Body Experiences.

FA dreams can also result in a loop, as a brief period of “wake” in a dream can result in another sequence of FA dreams5. This scenario is often reported to be terrifying anecdotally, especially if the loop appears to be endless or repeat after themselves on a regular basis. It was suggested that the methods to end the loop or get out of these FA dreams rely on the dreamer’s ability to manipulate their own dreams (the ability to control lucid dreams)5. For example, “willing” themselves to be in a different room, checking the accuracy of the surroundings around themselves, attempting to slightly move their body, trying to fly up or sink through the bed (probably to slip into the familiar dimension), and several others. More research on FA dreams is needed to precisely determine ways to reliably end scary FA dreams.

So far, very few polyphasic sleepers in the community have ever reported to be trapped in an extended FA loop (mostly 2-3 cycle loop max), as well as encountering FA dreams on a regular basis. No polyphasic sleepers have ever stated any reasons to avoid or stop polyphasic sleeping because of FA dreams, whether they have encountered these dreams or only heard about them. Some are even genuinely fond of these dreams. Another question is that if intense REM naps are always present on extreme polyphasic schedules, is it truly a healthy and efficient way to sleep – as the body has to cut out light sleep to accommodate for REM sleep?