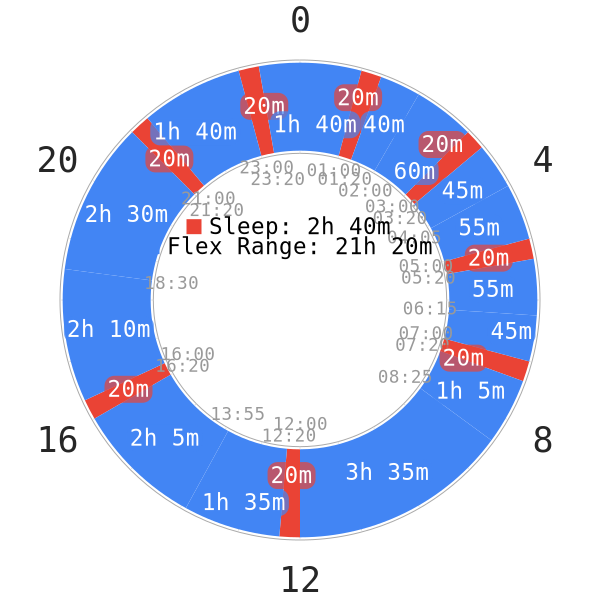 SPAMAYL is an abbreviation for â€śSleep Polyphasically As Much As You Likeâ€ť. This schedule will likely be below the minimum sleep threshold of most people, and adaptations to it are extremely rare. Having 8-12 naps around the clock gives little leeway for productive work between naps; in addition, it is necessary to schedule meals around the hectic napping lifestyle. Therefore, individuals without reduced sleep needs should avoid this schedule.

Stocking up sleep in a day and having few or even no naps the next day is reportedly possible on this schedule. However, there are a couple things to note:

Rasmus proposed this schedule and reportedly stayed on it for 1.5 years.

The birth of this schedule eventually led to the creations of 3 other “-AMAYL” schedules, while the primary sleep principles carry over. Another premise of the schedule is to hover around a somewhat consistent total sleep time from day to day to stabilize the naps. From that point, it also becomes effortless to predict the patterns of tiredness.

SPAMAYL fits those with self-employment, but is also possible for programming jobs or any jobs with stable daily timetables. For those who are fully adjusted to 20m naps, there is allegedly no limit in SPAMAYLâ€™s flexibility.

However, because of the flexibility of the schedule, it offers a lot of niches for consideration. Refer to the research below for a better idea on SPAMAYL’s behavior.Â

Interested in a literature source on SPAMAYL? Read here.Â

The effects from SPAMAYL during intense situations that require indomitable motivation are worth a deeper look. Based on the cited research, it is then reasonable to resort to SPAMAYL in critical living conditions that demand an excess amount of wake time. Most importantly, these physically and even emotionally taxing tasks are manageable with SPAMAYL if they only last for a few weeks.

Personal motivation is a strong factor for any nap-based lifestyles after all. The situations below as a few examples can benefit from a temporary SPAMAYL attempt:

The flexibility of the schedule (including nap duration) invites more possibility forÂ longer naps to relieve more tiredness and sleep pressure. Getting some rest from naps coupled with the adrenaline from the stressful situations can provide certain amount of vigilance in the event of severe emergencies; skipping sleep entirely can heavily affect decision-making skills. This flexibility also outclasses other fixed nap-only schedules like Uberman.

Oher notes on strengths and weaknesses

The goal is not to adapt to SPAMAYL under these circumstances, but to use it as a way to learn to increase the body’s efficiency to squeeze the most rest possible from each shuteye session. The brief experience with this nap-only behavior may be tempting for certain motivations behind some personal sleep experiments. All can become doable without having to worry about the pressure of any adaptation.

Despite the niches, SPAMAYL also has blatant downsides:

The idea behind the schedule is to entrain the habitual 20m naps by napping for only 20m when tired enough.

Rasmus, the inventor of the schedule, said he never felt tired and once he was tired enough he would lie down and take a 20m nap.

It is worth noting that the successful adaptations so far are pretty much from sleep mutants and heavy insomniacs.

What variations of SPAMAYL actually work?

In Rasmus’ words, most naps are focused in the night, because it is usually harder to stay awake at night than in the day. Adapted Discord user Charlaxy also reported the majority of naps at night (8-10pm through sunrise hours around 7 AM). Usually, nighttime naps allow for SWS gain and ensures some night sleep. As a result, she can limit daytime naps to have a more comfortable social life.

However, that is not the only variant of SPAMAYL that can work. Since SPAMAYL has so much versatility and can manifest in a vast array of forms in an adapted person, there is no limit on the number of SPAMAYL variants that can work.

Up to date, there has been more adaptation success to SPAMAYL, especially with the use of longer naps. “-AMAYL” polyphasic schedules do not confine to a specific sleep duration all the time, and SPAMAYL is no exception.

The reason why such nap lengths can work is largely attributable to the perpetually fragmented sleep in insomniac individuals.

The above example serves to illustrate the position of a longer nap in SWS peak to ensure more uninterrupted SWS goes into this nap; other naps concentrate during graveyard hours to reduce the sleep pressure at nighttime.

Contrary to the version with longer naps, experienced sleepers can also make use of ultrashort naps (~5m). The primary benefits from these naps include the following:

However, these naps have more limited recuperative power than a longer nap. It is also unknown how long an individual can stay on a nap-based schedule with varying nap durations; more information from research would be necessary to understand how often these ultrashort naps can appear.Â

Because of the rare adaptations so far, the most natural method of adapting to this pattern is cold turkey. Their drastically reduced sleep requirements enable these sleepers to sleep when tired in short bursts. They utilize their broken sleep as a result of insomnia or certain genetic factors to dictate sleep time and sleep around the clock.

Here’s a quick map of a SPAMAYL adaptation, and mileage may vary:

Having no core sleeps forces the naps on SPAMAYL to finally repartition REM and SWS into each nap.Â  This is different from the naps on “-AMAYL” schedules with a core sleep, whose adaptations always require an adaptation to a strict base schedule first.

According toÂ Rasmus, â€śduring adaptation one can go nap for 20m, wake up (and actually do things rather than just sitting in bed) for at least 20m. After at least 20m has passed, they can go back to sleep for 20m if sleepy enough. Rinse and repeat the process. However, this adaptation scheme is debatable.

While this approach looks viable, no one has successfully adapted to SPAMAYL this way. This is due to the immensely difficult adaptation to a nap-only schedule as the first step, let alone learning to flex sleep on a nap-only pattern.