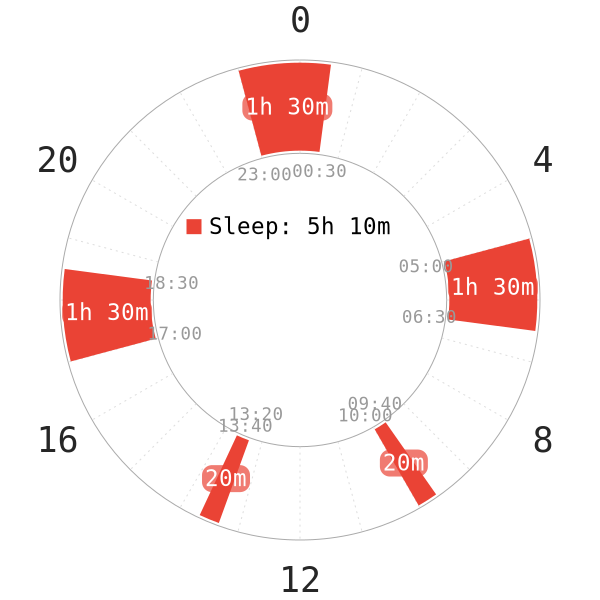 Tri Core 2, or TC2 for short, is the second polyphasic schedule in the Tri Core family. It is still a multi-core schedule with 3 core sleeps,Â  but now has 2 naps total each day. This bumps the total sleep to 5h10m, which is equivalent to the likes of E2. LichterLoh, a Discord member,Â was the creator of the schedule.Â

Tri Core 2 is also one of the newer Tri Core prototypes. Its intent and design are largely different from those of the predecessors Triphasic and TC1. The idea behind TC2 is not to cram all core sleeps into the night like TC1 or having somewhat equidistant cores like on Triphasic. The following differences about TC2 are as follows.

Because of a generally bigger wake gap between the cores, it may be easier to fall asleep in the 2 cores around graveyard hours (~midnight to 8 AM). This can lower the chance of oversleeping with subsequent naps and another core in late afternoon. This late afternoon core likely behaves the same as the daytime core on Triphasic, giving mixed SWS and REM.Â

Tri Core 2 has a decent total sleep, which may factor in an easier adaptation than its predecessors. However, like other split-core schedules, TC2 looks overwhelming for any non-natural segmented sleepers.

The sleep blocks being in close proximity can amplify the sleep onset issues at the beginning of adaptation. Falling asleep midway into each core can also likely yield SWS and REM wakes; this is largely owing to the mechanic of a regular 90m sleep block. However, the support from the extra naps provide more opportunity to learn the short naps and fall asleep effectively.Â

During adaptation, the cores at night will likely be the most burdensome to handle. The daytime sleep blocks, on the contrary, are easier to handle. The third core also looks like a daytime siesta. Because of the limited adaptation samples, it is unclear if TC2 is harder than TC1.Â

Aside from this standard variant,Â no other variants of TC2 have proved to work thus far. However, having a similar setup to TC1 may be viable to attempt.

So far, there are very few adaptations to TC2. This is the case because:

However, Tri Core 2 may have certain perks for usage:

Despite all the possible perks, TC2 is still vastly shadowed by other more comfortable schedules. This includes E2 (same total sleep), E3-extended (easier adaptation), DC1, DC2, and its own Tri Core counterparts. It is overall not a long-term polyphasic schedule, despite some viability.

Extending any of the core sleeps by 90m proves to be more of a nuisance to schedule 5 sleeps; thus, it is highly ill-advised to attempt any extended versions. Because TC2 looks very redundant, it is a better approach to attempt any of the more convenient schedules.