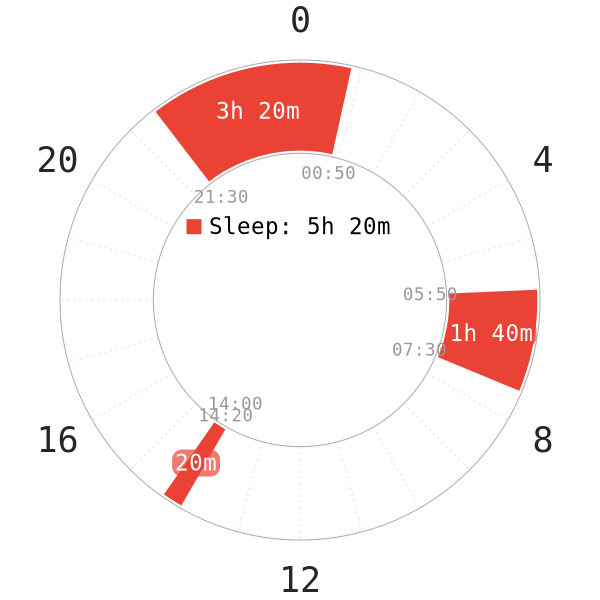 Dual Core 1 (DC1) is a schedule that evolves from Segmented sleep. It now contains three sleep blocks per day. Dual Core 1 is similar to E2, the first schedule in the Everyman line. It is the first Dual Core prototype with new characteristics.

DC1 is a very fairÂ polyphasic schedule to attempt, given a decent amount of sleep, ~5.3-6.3h. It is one of the most beginner-friendly schedules.Â

Dual Core 1’s mechanisms largely carry on from the original Segmented sleep. What applies to Segmented sleep is also present in DC1, with some changes.Â

Are the stock core lengths on DC1 and DC2 valid

However, there have been some changes in Dual Core 1’s scheduling proposals over the years. The most detailed compilation can be viewed in the attached PDF above.Â

However, according to EEG readings of some community members, sometimes cycle length might remain the same or shorter; thus, there is more light sleep at the end of the cores. DC1’s original design was intended to have a total of at least 5h for both core sleeps. This would be a reasonable upgrade from the sleep total of Segmented; at the same time, it is not overly taxing to adapt when a daytime nap is part of the schedule.

Dual Core 1 is often comparable to E2, because both of them are the first schedules in their respective schedule series (Dual Core & Everyman). They have a similar amount of total sleep and the same number of sleep blocks (3) per day. The only difference is that E2’s first nap is now a core in DC1, and that DC1’s first core should start earlier than E2 core.

This method mostly benefits naturally Segmented sleepers. They are accustomed to waking up at night or even doing Segmented sleep without their own awareness. Non-natural Segmented sleepers can also jump into Dual Core 1 cold turkey if there is not enough time to pull off a gradual adaptation. However, the adaptation process is potentially much more strenuous, except the extended variants.

This adaptation method is likely slower than cold turkey; however, the transition may be less stressful from an adapted Segmented. However, there is no guaranteed success for Dual Core 1. Moreover, this method actually has seen lower success rate than the cold turkey method. This is largely due to the amount of time it would take to achieve good results on 2 successive adaptations.

However, sleepers who have fully adjusted to Segmented for a long time also have the advantage. The transition to DC1 at this point puts them on equal grounds with natural Segmented sleepers who are about to start a DC1 adaptation.

Currently, there have been a few DC1 variants that have been successful, although success rate is still “Your Mileage May Vary”. These alternate variants serve different purposes of different polyphasic adapters and have a varying success rate.

In this variant, both core sleeps still give a total of 5h, however, there is a slight difference from the current version. This variant was the first one proposed by Polyphasic Society.

However, Dual Core 1’s sleep peaks possibly give a different effect on cycle lengths. A 3.5h core in SWS peak may not yield the same result as the same core out of SWS peak.

This variant would be a strong step after adapting to Segmented with the first core being 3.5h, because there has been some entrainment with the 3.5h core. This variant has little success throughout the years, however. It is reliant on a gradual adaptation from Segmented, which lengthens the adaptation time it takes to adapt.

2.5h core is often very uncommon and difficult; for an average person, it induces mid-cycle (SWS/REM) wakes right at the start of adaptation. This in return increases oversleeping chance, especially in the first core. Waking up from SWS has mostly been extremely challenging; on the other hand, waking up from REM is usually more manageable. However, both types of awakening can be just as disgusting during Stage 3.

Success rate up to date remains low; attempting a 2.5h core from the get-go is discouraged except in the case of experienced sleepers or those with sufficient understanding of their sleep architecture.

This variant has seen at least 1 success over time, relying on the buffer extra sleep that lines up with the 90m multiple rule (to ease scheduling). The second core is longer to account for a higher REM need. The higher total sleep also increases the chance for flexing either cores to greater effects. However, it still remains largely unpopular to date.

Attempting this variant is not bad in itself; however, the 2.5h second core is expected to be uncomfortable during stage 3.

There have been a couple attempts at this variant, however, success rate remains humble. The primary reason is the relatively low total sleep that almost looks like Triphasic sleep. The repartitioning of sleep stages will be a lot more intense than on the standard version. There are benefits, however.

Beginners should not attempt this variant. In addition, it would be better for individuals with lower sleep requirements. It is also unknown how flexible this version would be after the adaptation phase; there are no records of its flexibility.

These variants originated from Triphasic sleep, whose total sleep is also 4.5h.

Over time, both of them become DC1-modified rather than Triphasic-modified because there are 2 cores and 1 nap. Each of these variants with odd-cycle length has only reported 1 adaptation success.

The rare adaptations make sense because of the sleep lengths and require a lot more efforts to make them work. Though mostly not a good idea, the first variant (2.5-1.5) may be preferable to the second variant. A short-term adaptation is also possible. It can give a lot of extra wake hours as burst time to complete a lot of urgent tasks.

While no less difficult than the likes of Triphasic, these variants’ advantage is the shorter daytime nap. It is more convenient than the nap on Triphasic. If an adaptation is possible, the long-term prospect is also more promising than Triphasic. The nap may be somewhat flexible after adaptation; unfortunately, neither successful attempters have shown how flexible these variants could be.

However, this has been very difficult and has essentially zero successful adaptation. Individuals with lower sleep requirement can take advantage of this variant, because they usually can stay awake longerÂ with a more distant sleep distribution, than an average person would.

This is a common ground in scheduling with E2 as well, with the morning gap between both naps usuallyÂ no longer than ~6h. This would limit excessive tiredness during the whole wake gap. The afternoon wake gap on DC1 and E2 (from the last nap of the day to the core) is usually tolerable even if they appear to be longer than the recommended length. Since it seems easier to stay awake during the day, up to 9h wake is viable for the afternoon gap.

It is uncertain what the advantages of this scheduling would have compared to the traditional setup. However, some individuals do claim that a short nap around sunrise hours would give more chance for vivid dream recall than a core sleep. This is probably because of a higher percentage of REM sleep in a nap than in a core. Furthermore, the period of REM that ends before awakening is likely shorter on a nap than on a core.

Only one person has reportedly succeeded at adapting to this variant. The daytime core looks like that on Siesta, but it is questionable how it can be managed long-term, while a daytime nap is a lot more convenient to schedule. Attempting this DC1-siesta hybrid is not advisable; the vast majority will be unlikely to adapt to this variant.Â

Both of these variants over the years have reported a lot of success (although more for the 4.5-1.5 core distribution). They are veryÂ beginner-friendly and offer a reasonable amount of sleep reduction . This would be approximately ~90m of sleep cut for an 8h monophasic sleeper. Those with a higher monophasic baseline (~9h) should also pick either variant. The choice between either variants comes down to REM and SWS requirements.

The non-reducing version is only a very niche option.

However, certain scenarios may prove that a non-reducing DC1 is a fine option.

Similar to Segmented sleep, Dual Core 1 offers a variety of scheduling options in its arsenal. A lot of variants have become successful, although the bulk of the success is from the extended versions. Either way, DC1 demonstrates that one can enjoy the night gap between the cores, keep up the Segmented habit, and further cement the schedule with a nap for more rejuvenation. Thanks to the sleep peaks and the circadian nadir around noon, DC1 is a well-roundedÂ schedule.

The second core sleep is also great for a lot of REM sleep and can sustain alertness well into the afternoon. This can set the foundation for very efficient morning productivity. The extended version also spares more room for evening social time.Â However, like a typical Dual Core schedule, the first core sleep often starts at earlier hours than Everyman sleep to make use of the SWS peak; an Everyman schedule (e.g, E2, E3-extended) still has more vantage points in terms of evening social time.

Looking for potential research paper(s) on Dual Core 1? Check them out here.Â

Regardless, more data is necessary to determine how flexible DC1 can be compared to E2, whose second nap is highly flexible in a lot of adapted people.

HavingÂ only 1 daytime nap, DC1 is suitable for a lot of regular jobs that allow 1 nap during lunch break. Thus, its long-term potential is also very shining. This is an advantage over any schedules with a daytime core (e.g, Siesta, Triphasic) which is more difficult to schedule. However, while the extended variants are more resilient, the default variant is less likely so.

All in all, Dual Core 1 remains a solid schedule to attempt; it is one of the most balanced schedules with moderate difficulty. Additionally, there is the extra time, benefits of the night gap, the maneuvering of both sleep peaks and a unique experience from both core sleeps. One core is very deep, potentially near a blackout yet peaceful and calm; the other one is often explosive with very colorful dreams. All these elements promise a blistering adaptation experience.