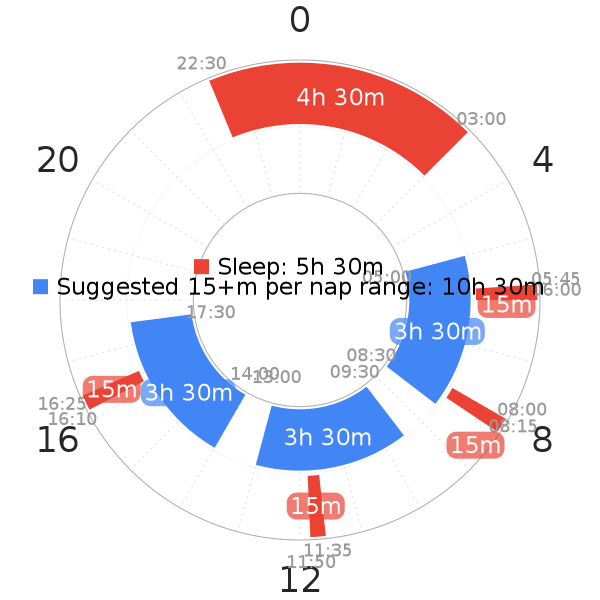 The name SEVAMAYL is an abbreviation of â€śSleep Everyman As Much As You Likeâ€ť. Because of an inability to adapt to this schedule cold turkey, adaptations are very rare. All of the twenty or more known attempts to adapt to a type of flexible, variable Everyman without prior standard adaptation have failed. Strict Everyman adaptations, however, have been successfully followed by flexed versions with a handful of community members in recent years. The ability to move naps assists with a hectic, changing lifestyle.

The main purpose of this schedule is to work around a flexible lifestyle that other polyphasic schedules cannot accommodate. The main challenge is the need to control your schedule for over a month in order to adapt to a strict base schedule first, before being able to adapt to SEVAMAYL.

SEVAMAYL fits those with erratic schedules, but is also possible to utilize with strict lifestyles. However when used on a strict work schedule, SEVAMAYL loses its purposes. If that is the case, a strict schedule or an Everyman schedule with slightly flexed nap times, but no variation in nap number or length may be more appropriate.

After a rigid Everyman-schedule has been adapted to, the brain has replaced its standard sleeping schedule and adjusted to a reduced sleep total. The new schedule then contains SOREM naps and highly repartitioned cores. Then, it is possible to shift this schedule without reducing sleep quality, as opposed to flexing during the adaptation.

Because the naps are flexible, they will most likely contain a lower amount of REM than the naps of the strict schedule. This may require an extra nap to give the same total REM sleep. Still, the core has covered a significant amount of REM, the main purpose of the naps is to alleviate homeostatic pressure. It is also possible to utilize Pronaps to more efficiently fulfill the REM need; one would need fewer naps later in the day.

As is the case with other schedules, quality naps give a large boost to alertness around the clock. The freedom given by this schedule is also very fulfilling.

What variations of SEVAMAYL actually work?

A couple notes about SEVAMAYL’s core and nap relationships:

Up to this point in time, there have been no successful cold turkey adaptations to SEVAMAYL. There have certainly been attempts, however all of them have failed. This is because the sleep pressure from shortening the total sleep time is not great enough to force the naps to repartition, as is the case with most schedules. SPAMAYL on the other hand, has no core to partially take care of the sleep pressure, leading to the naps forcefully becoming entrained.

A flexing adaptation is not going to look like a regular adaptation to a polyphasic schedule. It is going to require continuous monitoring and adjusting of sleep times.

These open even more versatility in nap duration of SEVAMAYL after adaptation. This leads back to the importance of the ability to listen to oneâ€™s own body when attempting this schedule.

Delaying a nap may increase desire to sleep, but once adapted will have no effect on performance, alertness, or general feeling of well-being until itâ€™s delayed excessively. Perhaps longer than an hour or two in the morning, or delayed longer than 2-4 hours in the evening. If you can anticipate that dayâ€™s busy times, you can plan an extra nap before as well as delaying the default nap much later.

It is important to plan your day so that you can reach a suitable napping spot when itâ€™s time for a nap. It is also necessary to also watch food intake and exercise to protect the naps’ quality.

SEVAMAYL is in some ways the holy grail of polyphasic sleep.

It takes many weeks and a lot of persistence, however. It is also mandatory to first establish more efficient sleep using a strict base schedule. That means life and sleep has to be controllable for up to about 6 weeks, before you can start attempting SEVAMAYL. Then, be prepared for as many as 7-9 additional weeks of adaptation to SEVAMAYL. SEVAMAYL’s adaptation mostly revolves around Stage 4, feeling â€śalmostâ€ť but not quite refreshing or stable. Risk of oversleep remains, even as natural wakes become frequent. Â

While SEVAMAYL is more resilient in flexibility, itâ€™s also prone to many of the same breakdowns as regular polyphasic schedules. Excess sleep due to illness, extreme emotional distress, or falling out of habit during a long vacation with monophasic sleepers can pose serious threats. Severe injury or excessive flexing can also cause too many oversleeps and undo adaptation.