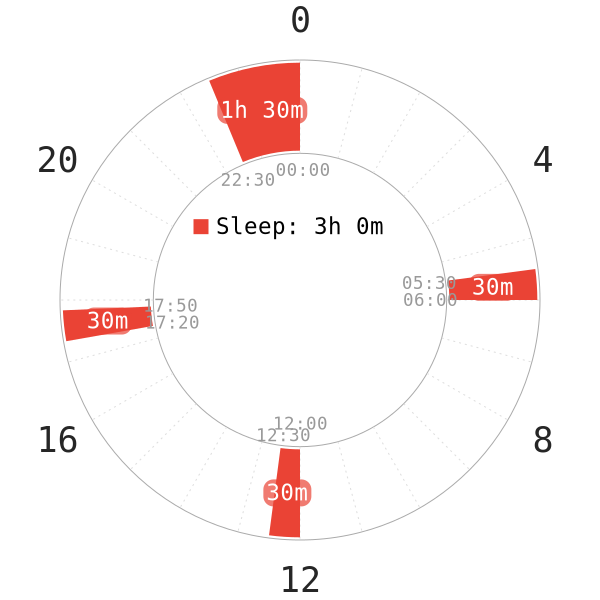 Trimaxion is a polyphasic scheduleÂ that combines elements ofÂ EverymanÂ andÂ Dymaxion families. Trimaxion, or Trimax, is a polyphasic pattern of the “-maxion” family. It is the third scheduling sequence from the original Dymaxion sleep, with a total of 3h sleep each day.Â

There is a total of 3 Dymaxion naps in Trimaxion (3 naps = “tri”). Trimaxion’s creation is a final transition step before Dymaxion. Starting with Bimaxion with 2 core sleeps, Trimaxion now replaces the dawn core of Bimaxion with a mere 30m nap; there is now only one core sleep remaining. As a result, Trimaxion gives a chilling total sleep of only 3 hours each day.

Trimaxion isÂ  a transitional schedule for a gradual adaptation route to Dymaxion, as well as a fallback schedule after Dymaxion becomes no longer sustainable.Â

As an average human needs approximately 90m of REMÂ andÂ SWSÂ each for optimal body and mind functions each day, the total sleep of Trimaxion is not sufficient to account for these basic sleep requirements.

Trimaxion’s distribution of sleep would take individuals with reduced SWS/REM requirements (or both) to be able to adapt to and sustain long-term. SWS and REM pressure will climb over a long period of days rather than being alleviated because of the limited total sleep. Attempting to sustain this schedule will cause chronicÂ sleep deprivation in average humans. Thus, polyphasic beginners and average sleepers should completely avoid this schedule.

Because there has never been any official success on this schedule, the cold turkey approach is a potential solution. As with many sleep mutants in the community who have adapted to multiple reducing polyphasic schedules, it may be more beneficial to start this schedule right away and attempt to hold on to it.

Bimaxion can be the first step to get used to the 30m naps. Then, the transition begins with replacing the dawn core with a 30m nap. However, given that Bimaxion is already tough for adaptation, this route likely isn’t efficient. Alternatively, one can attempt an adaptation to E3 with 30m naps first.Â

Trimaxion is approximately as difficult as the likes of E4, or possibly far more challenging. Compared to its predecessor step, Bimaxion, the loss of a dawn sleep block steeply boosts the insane adaptation. Both of these schedules are the closest step to their nap-only counterparts (Dymaxion and Uberman respectively).

Trimaxion is absolutely far more intense than Bimaxion; so far, it is the only schedule in the Dymaxion family without any reported adaptation success. There have been some attempts, but all ended in failure. While possibly suitable for mutants, Trimaxion’s true level of difficulty and certain mechanisms remain at a hypothetical stage.

The most challenging aspect of Trimaxion adaptation is the perpetual SWS wakes near the end of the naps, and possibly the core too. In order for theÂ repartitioning process to complete, both the nap(s) and the core will have to obtain enough SWS so that SWS pressure can subside to a healthy level. REM sleep’s competition will also make it problematic to balance with SWS gain. The graveyard hours promise to be hellish; productivity level during wake time can be severely crippled with an everlasting Stage 3.

Alternatively, adding 1 or 2 more 30m naps may facilitate the intense sleep pressure as adaptation progresses; however, it will only delay Stage 3 for some time. Stage 3 will return once these “buffer” naps are removed from the schedule. The attempter will still have to face the mountains of sleep inertia from each sleep block to reach the end of the adaptation.

Regardless of the shenanigans, all attempters have to avoid any oversleeping duration longer than ~15-30m to have a chance to adapt.Â

Since there is not a single successful adaptation to this schedule, anÂ extended variant (3h core and 3 30 m naps) is likely a lot milder; nonetheless, it would then become redundant. A standard E3 would be a more sensible option, even though the 3h core variant of E3 has accumulated a ton of adaptation failures over the years. Thus, Trimaxion-extended with 30 m naps is only more complicated and puzzling. It is crucial to observe a successful case to this schedule before any further theoretical alternate versions of this schedule become available.

Based on the structure of the schedule, Trimaxion would share the same lifestyle as Bimaxion. It actually has some advantages compared to E4.

For normal sleepers, the unforgiving drawbacks of Trimaxion include, but not limited to:

It would take a lot of efforts to maintain the delicate balance of sleep stages on this schedule. Other than Dymaxion, it would be better to adapt to Bimaxion instead. There is still the Dymaxion-style structure of sleeps and the 30m naps to experiment with. Those who enjoy 30m naps can also attempt a “-maxion” schedule like Trimaxion under emergency.Â