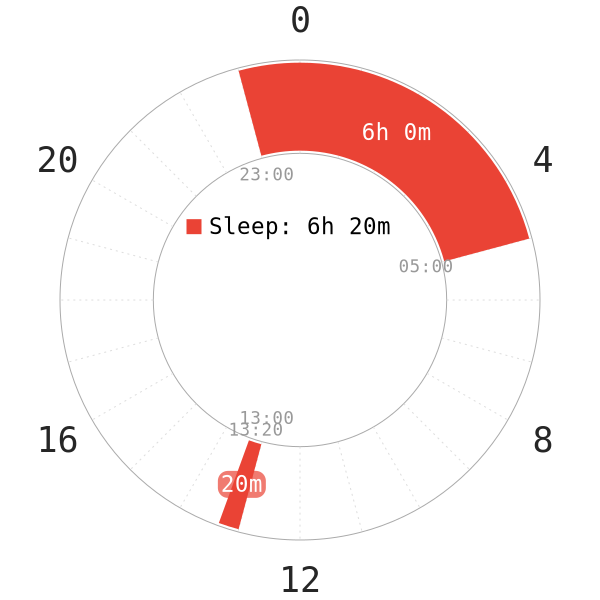 Everyman 1 is often mistaken for the first schedule in the Everyman line. However, it is a biphasic pattern because it only has 1 nap and overall 2 sleep blocks per day. It is an alternative Biphasic schedule with a short nap rather than a longer one as in Siesta sleep. Given some sleep reduction, it is a more advanced biphasic schedule than the regularly non-reducing biphasic/siesta in the world.Â

As part of the Formula in Ubersleep, Everyman 1 is part Everyman and part Biphasic. Puredoxyk postulated that each full cycle of a core sleep is equivalent to a nap full of REM. First, assume a 7.5-8h monophasic baseline. Then, a daytime nap’s addition compensates for the reduction of 90m from the monophasic core sleep. The purposes are to:

Sleep deprivation will accumulate and increase the napping efficiency. This napping method is likely easier than on a non-reduced Biphasic schedule (e.g, Biphasic-X); there is more sleep pressure from a shorter core sleep than from a non-reduced equivalent.

Since Everyman 1 does offer a fair amount of sleep, it is then straightforward to do the cold turkey adaptation method. However, learning to nap on Everyman 1 may take up to several weeks compared to other reduced schedules. A lot of people are used to sleeping monophasically for only 6h a night, due to work, stress, etc. They can “survive” without the nap. Consequently, reduced monophasic sleep leads to chronic sleep deprivation if their monophasic baseline is higher. Thus, for these cases it will take time for sleep pressure to build to facilitate napping.

However, certain sleepers can fall asleep in the nap after only a matter of days on the schedule. Individuals capable of doing this are usually experienced polyphasic sleepers or nappers. They are able to fall asleep during the day naturally without any sleep deprivation.

With some sleep reduction, Everyman 1 follows the same rules as any other reducing polyphasic schedules. There are exceptions, however. Usually, the total sleep on E1 (6.3h) is a benchmark for measure. If it is approximately the same as personal monophasic baseline, these individuals can then proceed to have a regularly flexible nap. A somewhat flexible core sleep from day to day is also possible. They wouldn’t need to stick to the sleep times by the minute during adaptation.

Everyman 1 looks to be a straightforward biphasic schedule for beginners; however, the adaptation results from E1 over the years do not reflect the true difficulty level. There have been many reported problems that prevented beginners from adapting fully. These problems persist even after many weeks on the schedule.Â

The culprits behind the dragged-out adaptations are:

According to the Polyphasic Survey 2018, onlyÂ 50% of ADAPTED E1 sleepers managed to get REM in their nap. This result demonstrates that the sole afternoon nap does not guarantee REM sleep (trace SWS, or mostly light sleep instead). The idea can explain the incomplete repartitioning of REM sleep and the failure to obtain a sufficient amount of REM sleep each day.

Based on the data, it is still possible to complete the adaptation to Everyman 1 with no REM in the nap. The overall time it takes to adapt to E1 is anywhere between 4 and 10 weeks. With all the available information, E1’s difficulty is now “Moderate” as opposed to “Easy” to reflect a more accurate picture.

If the adaptation to E1 is complete after a reasonable amount of time (within 2 months), it is possible to proceed to E2 and E3. These schedules are parts of the Everyman line, with each added nap for a 90m core reduction.Â

With the common trend to schedule the Everyman 1 core at 11 PM or midnight-ish (with good management of dark period, food and exercise), E1 is quite versatile in scheduling. A couple E1 sleepers have succeeded and even maintained a lot of these variations for an extended period of time. Some of them still remain on the schedule after at least 1 year. It is wise to consider these options before deciding on which variant to try.

For 9-to-5 occupations, which are very common nowadays and do not allow any naps during lunch breaks, it is possible to schedule this E1 variant with a nap after work (~4-5 PM) and a core around midnight or slightly later. However, there has been less success with the variant.

Overall, the adaptation can therefore be harder than normal. However, an early riser can still take advantage of the distribution of sleeps presented.

Another viable alternate variant with some success.

Recently, aÂ new core length variant (6.5h core) has been delivering solid adaptation results. The basis behind this variant is the same as the default equivalent; one full cycle is removed from an 8h monophasic baseline with the addition of a nap. There has also been a successful story with a physically active lifestyle. However, only few sleepers have decided on this variant. A couple things to note:

The following cases can take advantage of the 6.5h core:

However, like other variants, the nap should not be later than 5-6 PM; the community still needs more data samples for this E1 variant to discover its potential weaknesses.

However, this scheduling option has limited usage because most people prefer to dedicate the evening hours to other social activities.

The possible difficulties of E1 are as follows:

If needed to be non-reducing, Everyman 1 can abuse various sleep mechanics:

Recently, there has been some success of this variant with very young teenagers or people with high sleep requirements who pursue the safest way to partake in polyphasic sleeping. They have the option for a daytime nap to train napping skills. This usually serves as groundwork for them to move to a more difficult schedule when time allows. Compared to Siesta, the short daytime nap of E1 isÂ easy to schedule around meal times and social events.

Curious about a research paper for Everyman 1? Look no further than here!Â

Everyman 1 is overall a powerful biphasic schedule to prepare beginners for more advanced schedules. In addition, it does benefit a vast array of lifestyles.