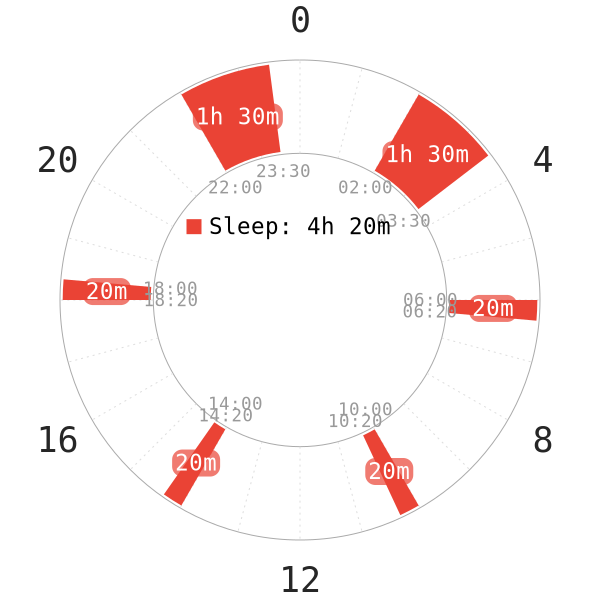 Dual Core 4, or DC4, is the newest polyphasic schedule in theÂ Dual Core family. It was a creation of the Polyphasic Discord community. Similar to Dual Core 3, it also has 2 core sleeps of one-cycle length each, with the addition of a fourth nap. The total sleep is 4 hours and 20 minutes, which hovers around the very bare minimum amount for adaptability.

As a typical Dual Core schedule, Dual Core 4 inherits all the characteristics from Segmented sleep; this includes the following:

Despite looking more “reasonable” than DC3 with an extra nap, there has been no successful adaptation to Dual Core 4 as of now. Similar to E5, it goes to show that adding more segments to a polyphasic schedule may not make things any easier. DC4 attempts are also extremely rare, let alone successful adaptations. Because both cores only have 1 full sleep cycle, a very daunting adaptation should be expected.Â

There has been a very close success from this adaptation method. The sleeper was in late Stage 4 before quitting medications cold turkey knocked him off the rhythm. If one would want to attempt DC4, cold turkey method would be ideal; this especially applies to naturally segmented sleepers.Â

As an alternative, one can transition to DC4 from an adapted Segmented or any Dual Core schedules (bar DC3). The entrained split core sleep habit should enable an easier adaptation to DC4. However, while looking realistic on paper, there has been no success with method, either.Â

Transitioning from a Tri Core schedule, like TC1 is also possible. The first core starts at the same time (e.g, 9:30 PM above) to ease the transition process. The wake period from the first to the second core is also 3 hours long just like on TC1. The third core of TC1 now simply breaks down into several short naps.Â

While this method looks feasible on paper, no one has been successful at this transition.Â

In contrast with gradual adaptation, one can also fall back on DC4 after failing Uberman. The rhythm of 6 sleep blocks of Uberman should align with that of DC4. Notwithstanding, no one has resorted to this method to adapt to DC4, either.Â

Dual Core 4’s true difficulty may even be more than that of DC3, because of the extra nap that may stagnate sleep onset. It will likely take longer for all naps on this schedule to stick. The other sleep blocks closely resemble DC3, so this adaptation will be along the lines of E3/Bimaxion, if not more difficult. SWS and REM wakes during the cores will be intense during stage 3, and extensive alarm setup is a requirement. The sharp repartitioning of sleep stages at first may induce SWS into the 2 afternoon naps, causing a lot of grogginess upon awakening.

With a fourth nap on the schedule, DC4 now has a total of 6 chances for oversleeping each day; the immense sleep pressure can lead to oversleeping in any sleep blocks.Â

It may be possible to extend a core sleep on DC4. However, doing so will become largely redundant; this may result in the removal of a sleep block. The schedule would then become DC3 to facilitate sleep onset issues. The wake period between the cores can be shorter, but it is questionable if this would be productive.Â

The wake gap between each sleep is too small for a lot of real-life activities, with the comprehensive forfeit of social life. While posing a Uberman-rhythm between each sleep and the total sleep appears to be sustainable for an extended period of time, the clumsiness in schedulingÂ just adds to the burdens. DC4 is vastly inferior to DC3, and the transition to Uberman can take several months.

So far, it remains a hypothetical polyphasic schedule that has been far from being fully tested. Notably, no one has adapted to Uberman from this schedule, either.

With all the downsides, DC4 can still have some uses: